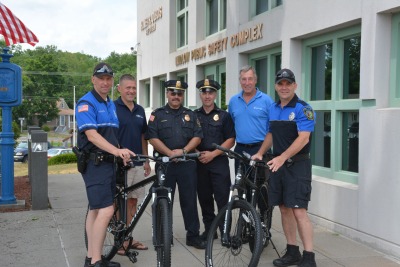 Shortly after Bubble Blast and Summer Safety Day in June, our team began reflecting on all of the ways local police officers support, protect and serve our community. Being in the business of “investments”, we wanted to find a way to not only say “thank you” to the Ludlow Police Department, but also contribute by investing in the future of their department, their service and our community at large.

The LPD Bike Unit has been in existence since 1996, staffed by both Regular and Special Police Officers. A few weeks ago we had the pleasure of donating two new Cannondale patrol bicycles to replace their 20-year-old equipment.

“Our team wanted a meaningful way to show our gratitude to the Ludlow Police Department. Their hard work and dedication supports our community in so many ways that often go unheard and unseen. As we move into summer, we thought what better way to say ‘thank you’ than with new equipment that will hit the road immediately,” says Managing Partner, Ed Sokolowski.

Read more about the donation, as seen in the Ludlow Register, Wednesday, July 13, 2016 edition:

LUDLOW – The Ludlow Police Department has received new bicycles donated by Pioneer Valley Financial Group. The new bicycles will be used for patrolling parts of the town that squad cars cannot usually traverse and patrolling large events that might attract crowds of people.

But the two new bicycles aren’t the first of their kind that the department has used. Officer Thomas Lee has been patrolling using the departments’ bicycles for the last 20 years, since the depart­ment first invested in the vehicles. He says that the benefits of having the non-motor vehicles outweighs any drawbacks. For instance, although the bicy­cles are limited in inclement weath­er – such as rain or snow – Lee says, they allow police to take part in community policing efforts. In situations such as an officer on a bicycle being able to talk to people in the community during patrols, the community is more likely to be receptive to the policing efforts of the department.

But the biggest benefit to the bicycles is that they can be used in crowded situations. During larger events – like Celebrate Ludlow or Festa – police on bicycles can maneuver through the crowds in situations where cars would not be able to fit.

“You can get in and out of the crowd,” Lee said. The bicycles also can be used in patrolling at night when it might be best for police to stay quiet. “You can get closer to people without them noticing,” Lee said. But in those situations, it’s espe­cially important to have a reliable bicycle. That’s where PVFG comes in. The financial group donated two Cannondale bicycles to the department a few weeks ago. The donation was officially accepted at the Board of Selectmen meeting last week.

The benefits of the Cannondale’s, Lee says, are that they are light and consistent. The brakes do not stick either, which helps keep the officer mobile. “These new ones are sensation­al,” Lee said of the bicycles. “It was a relief for us in terms of mainte­nance.”

He added that Pioneer Valley Financial Group made a name for itself with its charitable dona­tions. “Pioneer Valley [Financial Group] is a really nice group of people,” Lee said. “They’re really positive. They really believe in what they are donating.”

For the past three years, Pioneer Valley Financial Group has been awarding the “PlanWithAPurpose” tri-town…

Our financial advisors are ready to invest in your relationship, so you can invest in your future. Now is a good time.
Contact Us
This communication is strictly intended for individuals residing in the states of AZ, CA, CO, CT, DC, FL, MA, MD, ME, NC, NH, NJ, NY, OH, RI, SC, VT, WA. No offers may be made or accepted from any resident outside these states due to various state regulations and registration requirements regarding investment products and services. Securities and advisory services offered through Commonwealth Financial Network®. Member FINRA, SIPC, a Registered Investment Adviser. Privacy Policy Investments are not NCUA-insured, are not guaranteed by the bank/financial institution, and are subject to risks, including possible loss of principal invested. Copyright Pioneer Valley Financial Group 2021 - All Rights Reserved | Web Design by Envision Marketing Group