Senior Partner Charles “Chuck” Myers was raised in a Boston suburb, relocating to Western MA for college. He graduated from the University of Massachusetts, Amherst in 1981 with a Bachelor’s of Science in Public Health. At age eleven, Chuck vividly remembers his first volunteer experience when he signed up to help a disabled peer labor through a physical therapy obstacle course. It was from this point forward that his instinctive desire to help others began to blossom, mapping a natural progression towards his major in Public Health. Upon graduation Chuck took a direct service position at the Department of Mental Retardation; his servant’s heart proved invaluable as he was promoted to supervisor within six months. Chuck’s service minded leadership style gracefully led him through a successful twelve-year career at the DMR.

A moment stolen at “Night To Shine” for a quick selfie.

With two small children now in the mix, Chuck opened a local Belchertown Pet Shop while he remained part time at DMR. Having worked with veterinarians and humane societies throughout high school and college, Chuck had developed a devout love of animals. It was Chuck’s hard work and wide smile that turned his shoestring shop into a success. Once he moved to the Pet Shop full time, he spent 10 years helping customers solve problems and earnestly care for their pets. As a small business owner Chuck recognized the need for employee retention and long term financial planning. Once it came time to close his shop Chuck found himself answering Ed Sokolowski’s call for new team members and joined EQ Financial Consultants in 1997. In 1999 he moved to Palmer Goodell Financial Group, LLC with Ed Sokolowski and Joseph Leonczyk; together they realized the need to provide a truly comprehensive approach to financial planning. The doors of Pioneer Valley Financial Group, LLC, opened in March 2002 where Chuck currently manages the Operations Department. When Chuck’s son went off to college at UVM and joined the rowing team, Dad, Dan’s number one fan, decided he needed a high-tech camera to capture the priceless memories of his son’s team. It became evident that Chuck’s natural artistic ability translated behind the lens and he quickly transformed into an avid photographer. Today Chuck most enjoys capturing candid portraits, landscape and wildlife. Look for his favorite photograph of the Dog Tag Garden Memorial in Boston hanging in our office to see just how talented Chuck’s photography eye truly is. 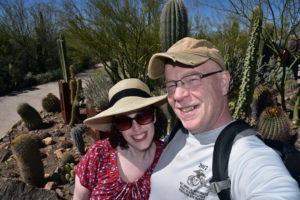 Amidst the cactus of Arizona.

Chuck’s artistic flare doesn’t end at photography; he is also a singing, songwriting and guitar playing extraordinaire. Ask him to play for you his favorite song, “Through A Window,” an easy listen rock single that he has effortlessly layered his voice, guitar, bass and keyboard with other instrumentals. Chuck is very active at his church, where he and his wife are involved in all aspects of serving their greater community. Chuck works to ensure his church is reaching the public through various programs, including their local food pantry and Springfield food kitchen services. A place near and dear to his heart, Chuck met his wife, Christine, at this very church. Christine is a published author and substitute school nurse. The pair have been married for over 5 years, and love to travel together when given the opportunity. Most recently, they ventured out to Arizona to take in the breathtaking landscapes of the Grand Canyon.

Foxy may be nine years old, but acts as if she’s 9 months.

When not busy dabbling in his art or serving his church, Chuck and his wife frequently run local races for various charity organizations. They also like to get involved in charitable causes in other ways, like sponsoring a child named Hairath from Tanzania through the Compassion International program or serving as chaperones at the “A Night To Shine” prom for developmentally disabled kids. Chuck and Christine welcomed a new member into their family when they adopted a 10-year-old Siberian Huskey named Foxy, who loves to run and has the youthful disposition of a puppy. The thing Chuck is most looking forward to in the coming year is becoming a grandfather, with a daughter having a baby on the way!